It's all about the Tegu and educating people about them. I made this page for everyone to enjoy info about these amazing reptiles that everyone loves from around the world. This page is packed full of information and proper keeping of this wonderful animal. So everyone can enjoy them .
Tegus are all terrestrial, meaning they do not prefer to climb. However they have been observed climbing trees in the wild to raid bird nests. Tegus are also very strong swimmers; they will not hesitate to cross water. Tegus are diurnal, which means they are active during the daylight hours.
Tegus are not known to venture out of their burrows or hides at night. They are very hardy reptiles, and can adapt to most living conditions in the wild. They have been known for begging for food in parks, as well as from fisherman. They are said to be like squirrels that we have in parks in North America.
The Argentine tegus can be found living very close to humans, often living in towns and suburbs in many places throughout their range. Colombian tegus feed on a large variety of insects, fish, small reptiles, amphibians, eggs, invertebrates and small mammals. They are fast-moving lizards of the species Tupinambis.
They inhabit tropical and subtropical regions of South America The Colombian tegus lays its eggs, usually six to eight in a clutch, in termite mounds, which serve as perfect incubators with well-regulated temperature and humidity. Colombian tegus are carnivores, or meat eaters. They are also far more wary and avoid human contact. This species of tegus are not known to hibernate. The Colombian tegus live close to the equator, while the Argentine tegus live there as well but also range much farther south, and can live in a much cooler climates. When we say much farther south, we are referring to farther away from the equator, thus in a much cooler climate. The Argentine tegus will also go into hibernation up to seven months. The Black and White Argentines go into hibernation earlier then the Argentine Reds.
Blue tegus will eat small amounts of fruit, but are primary carnivores as well. Very little is known about this species in the wild. They are also not as cold tolerant as the Argentine Black and Whites, Extreme Giant tegus or the Argentine Red tegus. The Black and Whites also start breeding sooner then the Reds or the Blues. The Blue tegus will also go into hibernation. In captivity they can be clicker trained as well as potty trained. The Argentine tegus are some of the most intelligent of all of the reptiles.
​Tegus have been known to sometimes potty train themselves, and they do actually like human contact. Most of the reptiles found in the pet trade tolerate human contact. Of the types mentioned above, the Argentine Black and Whites seem to be the easiest to tame.

Is A Tegu Right For You? 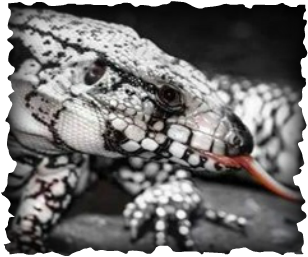 So you are thinking about owning a Tegu.  You should be informed before  making a decision to own one of these Amazing Reptiles.  These are some facts to help you make this decision.

3.) They are primarily meat eaters, but also eat fruits and vegetables.

4.) They are extremely good escape artists.

5.) They are voracious eaters!

6.) They can become aggressive if not handled regularly.

7.)  In turn, they can become very tame, depending a lot on your care and handling.

8.) They exhibit extreme intelligence, can learn easily, and depend on you for companionship. Tegus are said to be the          most intelligent Reptile on the Planet!

9.) They require quite large accommodations as they grow into adulthood.

10.) They need to be soaked in room temperature water at least twice a week.

11.) They seek and demand human attention!

I hope the above helps you make your decision on owning a Tegu.

If you have decided to own a Tegu, then keep reading! I will try to cover all the aspects of Tegu care and handling.

Where Do They Come From? 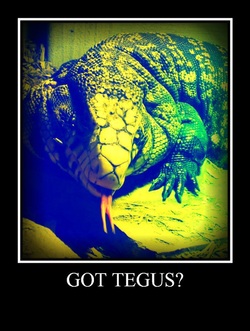 Argentine Black and White tegus can be found in Brazil, Rio Grande do Sol, N. Argentina, Bolivia, La Pampa, Santa Cruz, Uruguay, Buenos Aires, Cordova, Between rivers, Cordoba, Missions, Santiago of the Matting, Santa Fe, San Luis, Tucuman and Paraguay. Some of the common names for this tegu are Argentine Black & White Tegu; the local name is Largato overo or iguana egg eater, the same for the Colombian tegus, or the Chacoan tegus.

The Chacoan tegus are a different local then the normal Argentine black and whites; the Chacoans are the largest of all the tegus. They can be found in Grand Chaco area, or what is referred to as the Chaco plains.Argentine

The Blue tegu origin is scientifically unknown. It is said that they can be found in Brazil, and Colombia, however there has been photos taken of them in La Pampa, as well as French Guiana. This would be an area many miles apart and would suggest a very large range. Some of the common names for the Blues are Blue Tegu, Powder Blue Tegu, Blue Albino Tegu, Albino Tegu, and Snow Tegu. 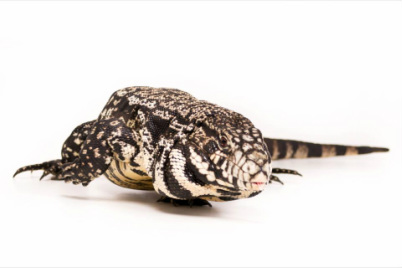