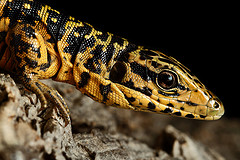 Tegus have been known to raid bees nest, they will break open the hives to get to the hidden honey. Tegus collected for food and hides, have been found to have stomach contents that consist of honey, seeds, fruits, rodents, birds, eggs and amphibians. They will eat frogs and toads every chance they get. There are also eyewitness accounts of them eating venomous snakes and toxic toads. However, the stomach contents were for the most part seeds, and fruits. 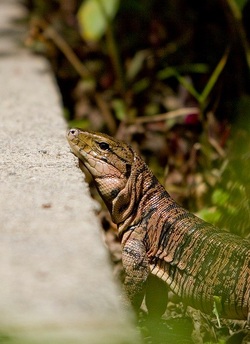 The Black and white tegu plays many important ecological roles in its ecosystem, largely because of its eating habits. Tegus, especially when they are young, eat tons of insects and insect eggs. Feeding on insects helps control the local insect population.

Since they also eat fruit such as berries, tegus are important seed dispersers. When tegus eat fruit from a plant, they gulp the fruit down, seeds and all! Later, after they’ve digested their food, they will “excrete” the seeds along with other waste, helping plant communities spread in size.

Last but not least, tegus can help control the spread of disease to other animals by cleaning the carcasses of dead animals that they may find in the forest.

By playing their part, Black and white tegus help keep their ecosystems well-balanced, biologically diverse and free of infectious disease. Their highly adaptable diet also comes in handy when trying to survive in areas where humans have changed the landscape for farming or housing. While many species find it challenging to share spaces with humans, tegus can get along very well by eating the insects, rodents and plants that live around our houses and farms. 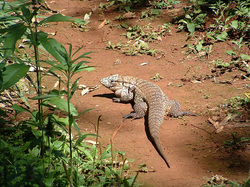 Black and white tegus are listed as a species of least concern. This means that, given their numbers in the wild, the conditions of their habitats and their interactions with people, they are believed to not be at risk of becoming endangered anytime soon.

Just because a species is listed as least concern doesn’t mean we don’t have to be careful! Tegus are hunted or trapped in areas of Argentina and Paraguay for many reasons. Tegu fat is used for medicine, and their meat is used as food for people and dogs. Sometimes these lizards are caught live to be sold in the pet trade, but tegu skin is sold to make leather goods.

The international trade and sale of tegus is legal, but hunting tegus is important for many people living in South American counties. Currently, local governments are doing a great job at making sure the hunting of tegus is done sustainably (in a way that doesn’t put tegus at risk of becoming endangered). There are programs to educate hunters and teach them how to help keep tegus healthy in the wild. Conservation groups also help hunters get involved in habitat protection programs to make sure wild tegus have enough space to live. By keeping tegu populations healthy through monitoring hunting and habitat protection, hunters won’t lose their livelihoods and tegus should continue to thrive in the wild.

Famous Last words : I "thought" i had tegu proofed the house....Never thought this would have been an issue. lol

Tegu Found In Argentina With 5 Tails

* Tegu is a large lizard. Males are bigger than females, usually reaching 4 ½ feet in length. Females are just 3 feet long. Tegus can weigh up to 20 pounds.
* Body of tegu is covered with beaded skin. Basic color of the skin is black with yellow dots that are stretching from its neck to the tail. Young tegus are green with black marks. Green turns into white after couple of months. Adult color develops usually after second year.
* Tegu is characterized by muscular body (especially males), very short neck and forked tongue.
* Tegu is an omnivore. Majority of its diet consists of plants: seeds, berries, fruit. It also eats small rodents, insects, eggs, amphibians, mollusks and birds.
* Tegu is capable of destroying the beehive because it likes to eat honey.
Some tegu species are able to eat venomous snakes and frogs without visible side effects.
* Tegus are known as very intelligent animals. When kept in captivity, they are able to recognize their owners and form a close bond with them.
* Tegu requires human love and affection. It will sometimes rather spend quality time with its owners instead to eat.Unlike the captive tegus, wild specimens will show aggression and try to fight with any potential predators.
* Main predators of tegus are: pumas, snakes and birds of prey.
* Tegus are terrestrial animals (spend majority of their life on the ground), but they are excellent swimmers.
* They often dive and can spend up to 22 minutes under the water without returning to the surface to breathe.
* Tegus are able to run on their hind feet.
* Tegus in the wild hibernate from September to March. This is a natural mechanism to survive cold period of the year when food is scarce.
* Before hibernation, female starts producing eggs. Two weeks after waking from hibernation, mating begins.
* Female lays usually between 12 and 30 leathery eggs in the nest.
Some species of tegus will hide their eggs in termite mounds, because they provide optimal temperature and moisture for development of eggs.
* Eggs will hatch after 45 to 60 days.Average lifespan of tegu is between 15 and 20 years in captivity.

This is a great story about an Argentine tegu. Dog tame Argentine Black and White Tegu. 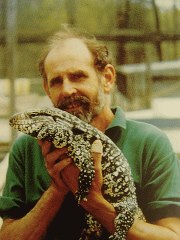 THIS WAS COPIED FROM:
Agama international Great story! Bert Langerwerf, and Tim Baker get all credit.

One Man's Experience with an Argentine Black and White TeguI owned an Argentine Black & White Tegu for seven years back in the 70's. She was an absolutely wonderful pet. I got her when I was working in a zoo while I was in college. She was an unexpected extra that came in with a shipment of reptiles from South America. They didn't have a place to keep her, and had had some bad experiences with some Columbian tegus. So, because of her large size and lack of knowledge about the Argentine tegus, the full-time staff were afraid of her. I thought she was a cool looking lizard. The fellow who ran the place told me if I thought I could tame her, I could have her. I went that evening to the university library and read everything I could find about tegus. I found a couple of articles about the Black & White tegus that talked about their intelligence and how they were easily tamed. The next day, I took him up on his offer.

She turned out to be much easier to tame and take care of than I could ever have imagined. She was very responsive to handling and seemed to like attention. I named her "Skeezix". She was 4 ft. 9 in. long and weighed about six pounds. Her intelligence amazed me. She seemed to have about the same intelligence and similar disposition as a good cat. She learned her name and would come when you called her (if she thought there was something to gain from it). In just one afternoon, I taught her to walk on a leash. I would take her outside almost every afternoon and let her crawl around and explore. After a couple of months, I realized that she had housebroken herself, on her own. She would scratch on the door to be let out. She was very curious and would very often go to investigate a noise or something she saw, people included.

Because of her size, and being housebroken, I let her run loose in the house most of the time in warm weather. She would often crawl up in my lap and root under my hand, like a cat, wanting to be scratched and rubbed. She really loved to have the top of her head and her back rubbed. I had a cat then and they got to be pretty good friends, often sleeping on the sofa or in my Lazy Boy together. She was gentle and completely trustworthy and never snapped at or bit anyone. Several times, I was invited to bring her, and a boa constrictor I had, to local elementary schools and I would to talk give a talk to the kids about the value of reptiles in nature and debunk a lot of the myths about them. And I would let them look at and touch Skeezix and the boa. But, the favorite with the kids (and me also) was always the tegu.

She was very good to travel with. I took her with me to many different places. She liked to lay up on the dashboard and stretch out and look around. We got some funny and surprised looks from people at redlights, especially when Skeezix would stick her head out the window looking around while flipping her tongue out. However, almost everyone that met her would end up liking her when they saw how gentle, intelligent, clean and responsive she was. Sometimes I would take her places in a wicker basket similar to a picnic hamper. She never fussed or caused a ruckus when I put her in the basket.

Her varied diet was also a surprise to me. I knew that she would eat meat, eggs, bugs, mice and such, but I learned that she also liked fruit, vegetables (cooked and raw), dog or cat food, melted ice cream, and even bacon, lettuce and tomato sandwiches. There were very few normal people foods that she wouldn't eat.

My experience with the Argentine Black & White tegu is that they make a fantastic pet and are a truly unique member of the reptile world. I am looking forward to owning another one (or two).