Argentine tegus breed soon after they come out from hibernation. About three weeks to a month after they emerge from hibernation. The males begin to actively pursue the females. Copulation takes place for one to two weeks. The female will start to build a nest seven to ten days after this takes place. I have found that fine hay and leaves work great for nesting. Females will build a nest that is about three feet in diameter and two to three feet high. They like to build these nests under things. I use a piece of plywood leaned against the side of the enclosure. All other tegus must be removed when the female starts building the nest. Females become very aggressive at this time. They will attack anything that they perceives as a threat to their nest and eggs. They will also get aggressive with their keepers. Argentine tegus and the Blues are the only lizards in the world known to build a nest. The female builds a two part nest chamber. The bottom chamber is for the eggs, the top is a guarding chamber. Females tend to hold this aggression well after the eggs and nest are removed. I would not suggest putting her with any other tegus until time for hibernation begins again. They have been known to attack and kill other tegus. In my studies, they keep this guarding mode regardless of where they are. I have tried to put them in a separate enclosure for up to a month after laying. When I add another tegu they attack it on sight. They are best kept alone during this period. Bert Langerwerf has seen these same actions with his animals. He too has stated it is better to house them separate until time for hibernation to begin. Argentine Black and White tegus begin breeding here in Florida around mid March until mid April. He claims the ratio of more males than females insure a fertile clutch. If one male is used with one female the clutch tends to have a 50% fertility rate. It is best to have two males to one female, or three males to two females, or seven males to five females, this will greatly increase the fertility in the eggs. Males are very impressive animals, the look like they would be very aggressive towards each other.

I breed tegus in pairs only, but I have found that males get along quite well, even during the peak of the breeding season. It is strongly recommended that Argentine tegus hibernate if the are intended to breed. Bert Langerwerf claims that if these tegus miss a hibernation, they will be infertile and unable to produce viable young. I would tend to agree with this theory. If a baby tegu misses the first year of hibernation, they can reach three feet in one year. If the baby hibernates he will be the same size at the time he hibernated. Babies that hibernate will reach about half as much or less in size as those that do not hibernate. In my opinion a baby that does not hibernate would have stretched reproductive organs, thus not being able to reproduce. Females that reach two years old start producing follicles in their system before hibernation begins for their third season. These follicles are carried in her system into hibernation. When she emerges, the male copulates and fertilizes the follicles, she shells the follicles and lays her clutch and then starts to grow follicles in her body for the following year. If a female misses a hibernation or this cycle, it is believed by some that she will absorb these follicles. It is a big question if she will ever reproduce again. My breeders have never missed a hibernation period, so I cannot say that they would, or would not produce again. Bert claims that they are useless for breeding if they miss one of these cycles of hibernation. Colombian tegus are not bred in the United States to any great extent that I know of. They are often times imported. They also do not require hibernation. I would tend to believe they would be more like the Ameivas and whiptails then the Argentine Reds, Argentine Black and Whites, or the Blue tegus. Gestation and removing the eggs.

The female will lay her eggs within days after completion of the nest. This period is about three to seven days after the nest is made. The female has been seen drinking vast quantities of water in dry conditions. It is believed that the female regurgitates water on the nest when it becomes to dry. Nests have been found to be more moist than the surrounding soil. Females can have between ten and seventy three eggs in one clutch. Bert Langerwerf recorded a single female lay seventy three eggs. The average clutch is around thirty eggs.

The female will be seen as quite thin after laying her clutch. At this time the eggs will need to be removed for incubation. Be sure not to rotate the eggs when removing them from the nest. It is also best to have the incubator already set up and the temperature and the humidity right. It is best to set up the incubator when you notice the female building the nest.

Courtship of the tegus

Courtship of the tegus, Tegus begin spring with courtship behavior, males perusing females, head shakes, popping jowls and dragging their cloacae along the ground. Females also show this dragging behavior, swaying back and forth, at the same time dragging the back half of their bodies. They also swing their tails side to side, holding the front half of the body higher. And I have noticed that red females tend to head bob. I have not seen this in the Argentine black and white females before, but only with the Red females. Males can get territorial if given enough space to do so, however if kept in smaller enclosures they tend not to fight between themselves. I also have noticed mock breeding between the males and this would be a show of dominance, this behavior can be seen in smaller and larger enclosures. In larger enclosures males can fight, but I have found this to be quite rare. Females on the other hand can be quite aggressive, this is mostly seen towards other females. This also depends on the female as well. Some females will get along with all the other tegus; some will attack any other tegu in an enclosure, however most squabbles are between females. This is much different after breeding and nest are made or being made. Nesting females will sometimes tolerate a male, but never another female that I have witnessed, however most will not allow any other tegus near the nest. These nesting females will attack and often kill another tegus if the venture too close. This is what I refer to as guard mode, they will also attack anything else including their keepers, regardless of how tame they are when they are not nesting. This aggression is shown long after eggs are laid, collected and the nest is gone. Most of the females will stay in guard mode until hibernation takes place; it is also thought by Bert Langerwerf that one in ten females can show his same aggression the following spring. I have not seen this in my animals, but I can see this as happening with the way some of the females act before hibernation. 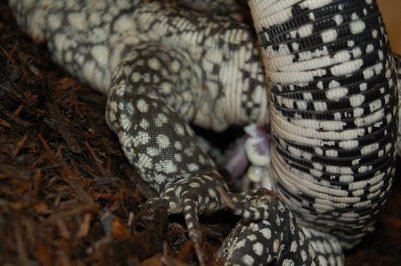 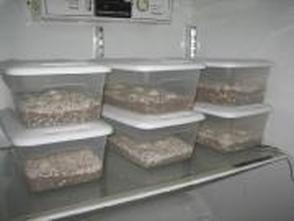 When setting up the incubator, it is best to use a mixture of one part of perlite to one part vermiculite.

I would incubated them using tight but spacious containers with no hole with vermiculite/perlite mixture that is 50/50 mix to water by weight ratio. I would think that in this kind of situation, the humidity would be pretty close to maximum which would be between 90-100 %. Tegu eggs are not like most reptile eggs. They do not get softer the longer they incubate. The eggs get larger and firmer the farther they incubate. This mold can cause a breach in the eggs. Tegu eggs have pressure inside them. Most reptiles produce firm eggs when they are laid, tegu eggs are dented and soft. They start becoming firm within a few days of incubation. Most reptiles eggs become dented when they get close to pipping. When tegus pip, fluid squirts up to twelve inches from the egg. I have not seen this in other reptiles.

The temperatures for incubation are best between 86° F to 90° F. I have heard of cooler temperatures as well as warmer, but this has worked best for me. The incubation period, I have found to be between 58 and 60 days. This time can run a few days longer or shorter. It is also not good to pip tegu eggs. These eggs will hatch if a healthy baby is inside. Tegu babies will not stay in the egg like most reptiles, they will bust out as soon as they pip.

I have heard of incubation times of 40 days to 120 days, but this is the time I have recorded with four different clutches. It would also depend on the temperature, a hotter temperature would tend to cause them to hatch faster, but the babies would be less healthy. Also at a cooler temperature the eggs would hatch slower. However I think 120 days is way off on time. I read this in a book, but I found this information hard to believe.

Babies need to be removed as soon as they hatch. They need to be offered some food as soon as they hatch. Hatchlings will sometimes start to feed within hours of hatching. Others will feed the following day. I offer medium crickets to fresh hatchlings, they seem to take these best. You will also need to have two different tanks set up for the hatchlings, some hatchlings might be smaller and less active. These will need to be removed and put into seperate enclosure then the larger more active babies. I use a 20 gallon long tank for hatchlings. This is a great starter tank. I put a heat lamp with a 65 watt bulb at one end. I also use a UVB, UVA strip light on top. This way the hatchlings can get warm or cool off as needed. A shallow water dish, and newspaper for the sub straight. The baby hatchlings will keep their bellies cleaner on this. This way no infections will start while the bellies seal. Remember Argentine tegus can take cooler tempretures than most other lizards. The basking side of the enclosure needs to be between 95*F and 110*F. They also need a cool side to the enclosure as well, this needs to be no warmer than the lower 80s*F.